Federal budget 2016: Top 5 signs that the shift to low carbon is real

“Canada can both protect the environment and grow the economy. These goals are not incompatible – they go hand in hand.”
–Catherine McKenna, March 22, 2016, Tweet 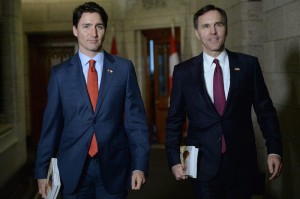 Minister of Finance Bill Morneau is accompanied by Prime Minister Justin Trudeau as he makes his way to deliver the federal budget in the House of Commons on Parliament Hill in Ottawa on Tuesday, March 22, 2016 (Sean Kilpatrick/CP)

On March 22, 2016, the Federal Minister of Finance, Bill Morneau, presented the federal budget. A number of budget items reinforce the federal government’s position that a competitive economy and environmental protection are linked.

We have summarized the key elements of the budget that we believe will help to create a truly sustainable economy. These budget items support growth, reduce environmental impacts and build social capital .

In the Speech from the Throne in December, the Government highlighted that they would “make strategic investments in clean technology, provide more support for companies seeking to export those technologies, and lead by example in their use.” Cleantech has frequently been at the intersection of the government’s conversation about the economy and the environment, offering the promise of new jobs and opportunities while supporting climate change goals.

The budget reflects this, containing money for research and technology clusters.

Minister McKenna has said that the national target for cutting GHGs set by the Conservatives – a 30 per cent reduction below 2005 levels by the year 2030 – should be considered a floor for future action. The federal government is currently collaborating with the provinces and territories on a pan-Canadian Framework on Clean Growth and Climate Change that will meet or exceed Canada’s targets.

The budget includes a section on the tax treatment of emission allowance regimes (currently, no specific tax rules exist to deal with these). The budget proposes to introduce specific rules to clarify the tax treatment of emissions allowances and to eliminate the double taxation of certain free allowances. The changes will be applicable to emissions allowances acquired in taxation years beginning after 2016. On an elective basis, it will also apply to emissions allowances acquired in taxation years ending after 2012. This clarity is important for provinces that have moved forward with cap and trade (Quebec, Ontario), and should a national program emerge over time.

The 2016 budget marks a critical milestone in Canada’s transition towards a low-carbon economy.  It clearly demonstrates the priority this Government has placed on meeting international and domestic climate commitments by backing them up with tangible financing. It also helps to reset the conversation in Canada on the nexus between the environment and the economy – recognizing that the two must be addressed together.