An Inside Look at Climate Week NYC: The top five themes 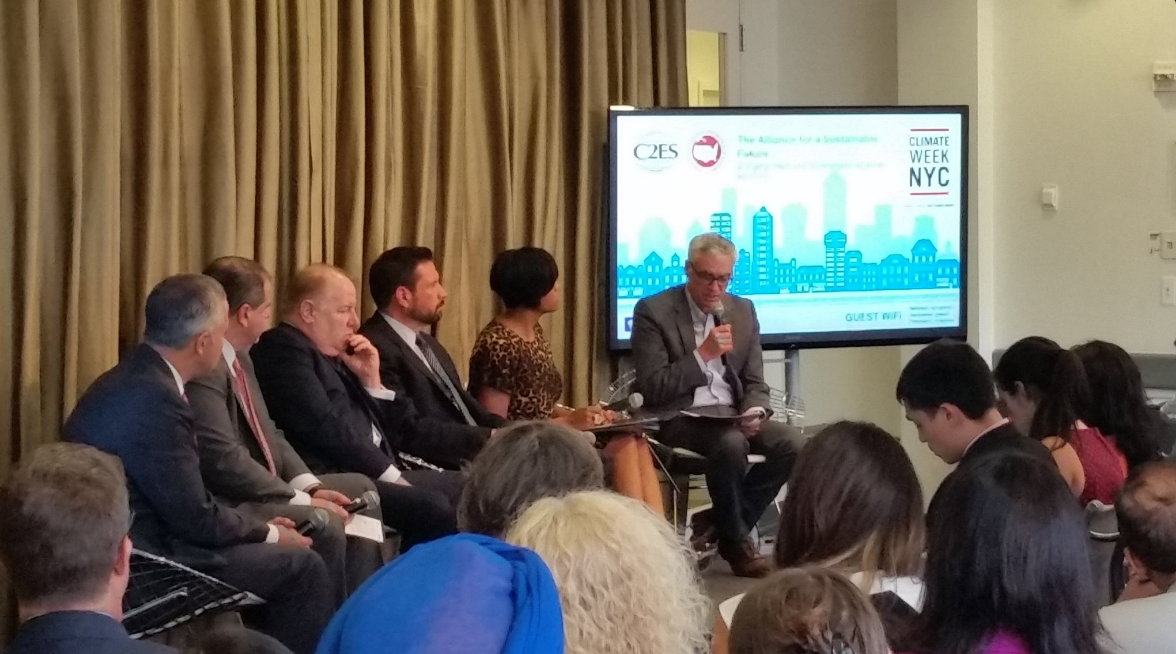 Currently, 191 countries have signed the Paris Agreement. This is a huge milestone, representing the first time that developed and developing nations from around the world agreed to limit global warming to below 2 degrees Celsius.

So, now what? Ratification, for starters. To date, 61 countries representing 48% of global greenhouse gas emissions have ratified the agreement. Earlier this month, President Obama announced the historic decision to ratify the Paris Climate Change Agreement along with China’s President Xi. Canada has signed the agreement and intends to ratify in the coming months. For the agreement to enter into force, at least 55 countries representing 55% of global emissions must ratify it—and it seems likely that this threshold will be met before the next UN climate conference, COP22, in Marrakesh in November.

Sub-national governments, corporations and institutions are not waiting for the green light from global leaders to act. Climate Week NYC was inspiring in that it brought together people from all sectors who share the same aim: driving climate action, and driving it now.

Action and hope around climate change are accelerating at an impressive pace. Here are five themes that emerged from the Climate Week sessions:

#1: Climate-friendly Practices are Becoming the New Business as Usual.

The business case for sustainability is clear: the Paris Agreement represents a global commitment to a low-carbon future. The risks associated with extreme weather events, rising energy prices, and stranded assets are incontrovertible.

However, climate-friendly is about more than risk mitigation. The CDP asserted that businesses that actively take climate into account enjoy 18% higher returns on investment than those that don’t. Kurt Vogt from HSBC claimed that sustainability is the “investment opportunity of the future,” citing green bonds as one example. There are many new products, services, and markets emerging here; we’re only just scratching the surface of the business opportunities associated with addressing climate change.

#2: Forward-Thinking Businesses will Not Just Survive a Low-Carbon Future, They’ll Thrive in It.

Leadership is about more than a global agreement, and it was heartening and inspiring to see signs of climate leadership from all parts of the world and the economy. US Secretary of Energy, Dr. Ernest Moniz, confirmed continued American leadership on climate action, highlighting the nexus of clean energy deployment, energy access, and economic growth in the United States and globally.

Last but definitely not least, many companies took advantage of the Climate Week platform to draw attention to their climate leadership. Apple and Bank of America, among others, are committed to running on 100% renewable energy. Siemens has committed to achieving a net-zero carbon footprint by 2030.

#3: Innovation and Ingenuity are Key to Unlocking Our Low-Carbon Future.

Delphi has been involved with the clean-tech sector for years, and we’re excited about how Canadian-made innovation is poised to transform both our economy and how we do business. This hopefulness was echoed in New York, with Dr. Jonathan Pershing, Climate Special Envoy, US State Department, stating: “What’s next for innovation? Real business opportunities and real social benefits. And hold onto your seats because it’s coming fast, which is a good thing because it’s crucial to solving the climate problem.”

#4: Climate Collaboration and Partnerships are the New Black.

From the Alliance for a Sustainable Future to the Under2MoU to the Compact of States and Regions to the Carbon Pricing Leadership Coalition (among many others), collaboration and partnerships are emerging in every corner of the world to address climate change. No matter how powerful some of these individual private and public-sector players are, they seem to know that the whole is greater than the sum of its parts. By sharing information and working together on solutions, they can move faster and more effectively on climate than if they were to go it alone.

#5: Show Me the Money: The Finance Industry is At the Table.

The big money was at Climate Week. There seems to be a universal understanding of the need to mobilize and accelerate enormous amounts of capital to deploy clean technologies, transform our infrastructure and enhance the productivity of all aspects of our economy.

I took part in important discussions about public-private funding mechanisms for scaling low-carbon innovation, measuring and standardizing green mechanisms, and developing climate-friendly investment portfolios, among other topics. We’re planning to advance some of these themes at our upcoming GLOBE Capital summit in Toronto in April 2017.

To impress (or possibly embarrass) my teenage boys, I’m going to call on my friend Jay-Z to sum up my impression of Climate Week NYC: “There’s nothing you can’t do/Now you’re in New York/These streets will make you feel brand new/Big lights will inspire you.”  I’ve been working on climate change for 20 years, and I’ve never felt more excited than I do now. The stars are aligning and momentum is building across governments and the corporate sector in a way that feels unstoppable. We’re finally moving beyond words to real, concrete actions. I’m incredibly proud to be part of this community and can’t wait to see where we go next.