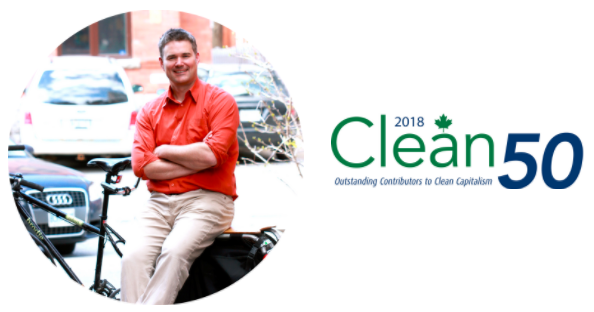 On behalf of the Delphi team, I’d like to congratulate Ted Ferguson on being selected as part of the 2018 cohort of Canada’s Clean50.

Ted has been working with business and government to advance sustainability in Canada for years, so we’re delighted that he’s being recognized for his leadership. Canada’s Clean50 Awards are announced annually by Delta Management Group and the Clean50 organization to recognize the 50 individuals or small teams who have done the most to advance the cause of sustainability and clean capitalism in Canada over the past two years. Ted was selected from hundreds of nominees to take his place in the Clean50 for 2018.

Ted really does live up to our mission of changing the world and having fun while doing it. Aside from leading the crackerjack team at Delphi, Ted developed the Energy Sector Sustainability Benchmarking Study (ES3), creating the only sustainability performance benchmark across the energy sector in North America. Over 80 Delphi clients now use the benchmark to prioritize their sustainability focused initiatives.

Ted also played a critical role in steering one of Canada’s largest energy companies to make a transformative shift: adopting an energy diversification business strategy that de-emphasized GHG-intensive fossil fuel investments and prioritized low-carbon and renewable-energy investments of up to $40B over 10 years.

We don’t do the work we do for kudos and awards, but it is certainly gratifying when one of us is recognized alongside Canada’s other sustainability leaders. Please join me in congratulating Ted, and here’s to another year of trailblazing!

-Mike Gerbis, CEO of The Delphi Group and GLOBE Series