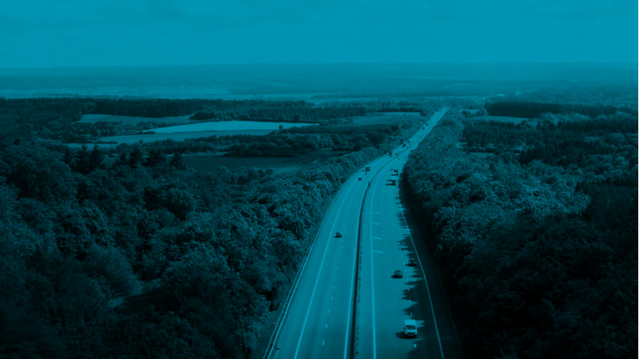 Your Cheat Sheet to Carbon Pricing in Canada

The Origins and Evolution of the National Carbon Price

The national carbon price has evolved since it was first unveiled as part of the Pan-Canadian Framework on Clean Growth and Climate Change (PCF), a federal-provincial-territorial initiative announced in 2016. The initiative encapsulated Canada’s strategy for meeting its 2030 carbon reduction targets under the Greenhouse Gas Pollution Pricing Act.

The PCF set out a federal benchmark: a minimum of $20 per tonne of carbon in 2019, rising by $10 per year to $50 per tonne in 2022. The provinces and territories had the option to design their equivalent or better carbon pricing system or adopt the federal backstop, in full or in part by early 2019. The federal backstop includes a federal fuel charge (FFC) and an output-based pricing system (OBPS) for large-emitting industrial facilities.

Since the launch of the federal framework in 2018, there have been many developments across the country as provinces develop their own carbon pricing plans or choose to implement the federal backstop. In light of these developments, we’d like to share our updated summary of the state of play in Canada. The map below gives you a snapshot of the various carbon pricing regimes across the country. 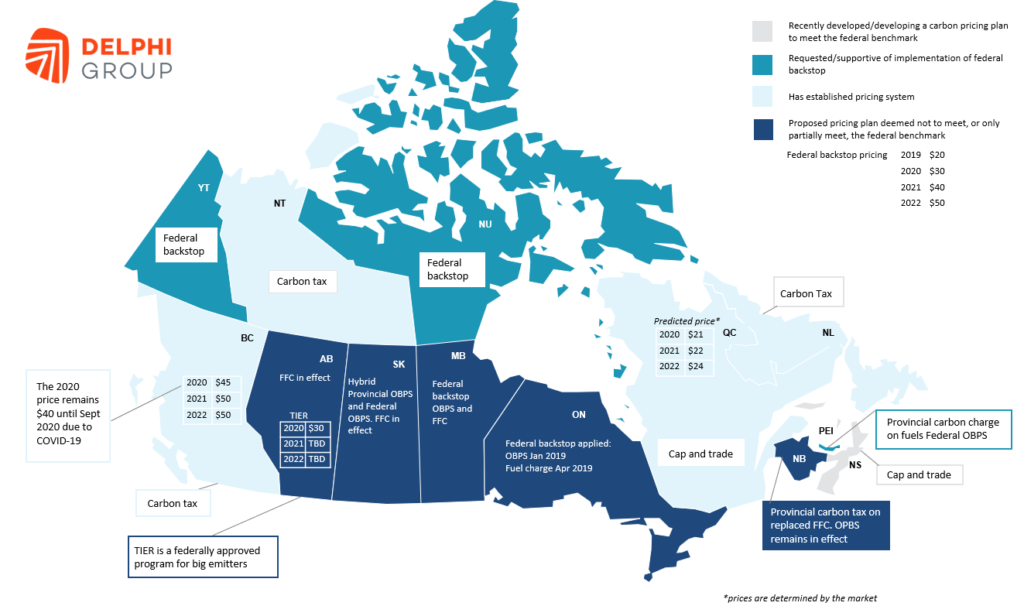 Although the PCF is being implemented across Canada, several provinces are challenging the federal government’s jurisdictional authority over carbon pricing. Alberta, Saskatchewan, Manitoba, and Ontario have taken legal action to challenge the federal government’s backstop framework. These court cases have escalated to the Supreme Court of Canada. Saskatchewan and Ontario will be the first to appear in court in September 2020. While these court cases persist, the federal backstop remains in place.

Breakdown by Province and Territory

Alberta has implemented the Technology Innovation and Emissions Reduction regulation (TIER) for large-emitting facilities. This program has been approved by the federal government and replaces the federal OBPS. However, since May 2019, the province repealed its provincial-led carbon levy for consumers and, as a result, the FFC remains in effect because Alberta only partially met the federal benchmarking requirements.

British Columbia remains a leader in carbon pricing, along with Quebec. Since 2008, the province has had its own carbon tax system in place. The B.C. carbon system is in alignment with the federal requirements. In response to COVID-19, B.C.’s carbon tax rate will remain at its current level of $40 per tCO2e until further notice.

Manitoba developed its Made-in-Manitoba Climate and Green Plan. It involves a clean fuel standard and a green levy of $25 per tonne. Although the province has announced its plan, the federal government has not approved this carbon pricing system and the federal backstop applies in Manitoba.

The “Made-in-Newfoundland and Labrador” plan was approved by the federal government in October 2018. It includes a $20 carbon levy on fuel that started in January 2019. Exemptions will include aviation fuels, home heating fuels, off-grid diesel generation, municipalities, and marine transportation between provinces. A performance standard that acts as a baseline for GHG emissions, is also being developed for large-scale electricity generation and large industrial facilities emitting over 25,000 tonnes annually.

The Northwest Territories introduced their own carbon tax on fuels in July 2019 at $20 per tonne, increasing annually to $50/tonne. It will exclude aviation fuel from carbon pricing and rebate 100% of the carbon tax for most heating fuel.

Nova Scotia launched its own cap-and-trade program in January 2019 that meets the federal backstop standards. The first auctions will start in June 2020 with a floor price of $20. There will be two to four auctions per year.

In Nunavut and Yukon, the federal government has administered both the OBPS and the FFC since July 2019. However, aviation fuel is exempted from the charge, and there is also relief for diesel-fired electricity generation in remote communities.

In Ontario, the Conservative government cancelled the provincial cap-and-trade program in 2018. In the summer of 2019, the province published the Greenhouse Gas Emissions Performance Standard (EPS). The federal government has not approved Ontario’s EPS system and the federal backstop is being applied.

Quebec has been a leader in implementing carbon pricing. The province has had a cap-and-trade system in place since 2012. In 2014, the province linked their system with California’s as part of the Western Climate Initiative.

Saskatchewan implemented its own OBPS in January 2019. It applies to industrial facilities emitting more than 25,000 tonnes of carbon dioxide equivalent (CO2e) or more, except for electricity generation and natural gas transmission pipelines. The federal OBPS will cover facilities in these sectors emitting 50,000 tonnes or more. The federal government also introduced the FFC in April 2019, which is currently in force in Saskatchewan.

Seemingly, the state of carbon pricing in Canada is not static but an evolving discourse between the provinces and the federal government. Effective carbon pricing implementation will require public support, corporate leadership, and government cooperation. A lot is riding on our ability to take decisive action on carbon in the next 10-12 years. An effective Canadian carbon pricing system is an essential part of the solution.

For more information on the evolving policy and regulatory changes to carbon pricing across Canada, please contact Julia Zeeman at The Delphi Group at jzeeman@delphi.ca.