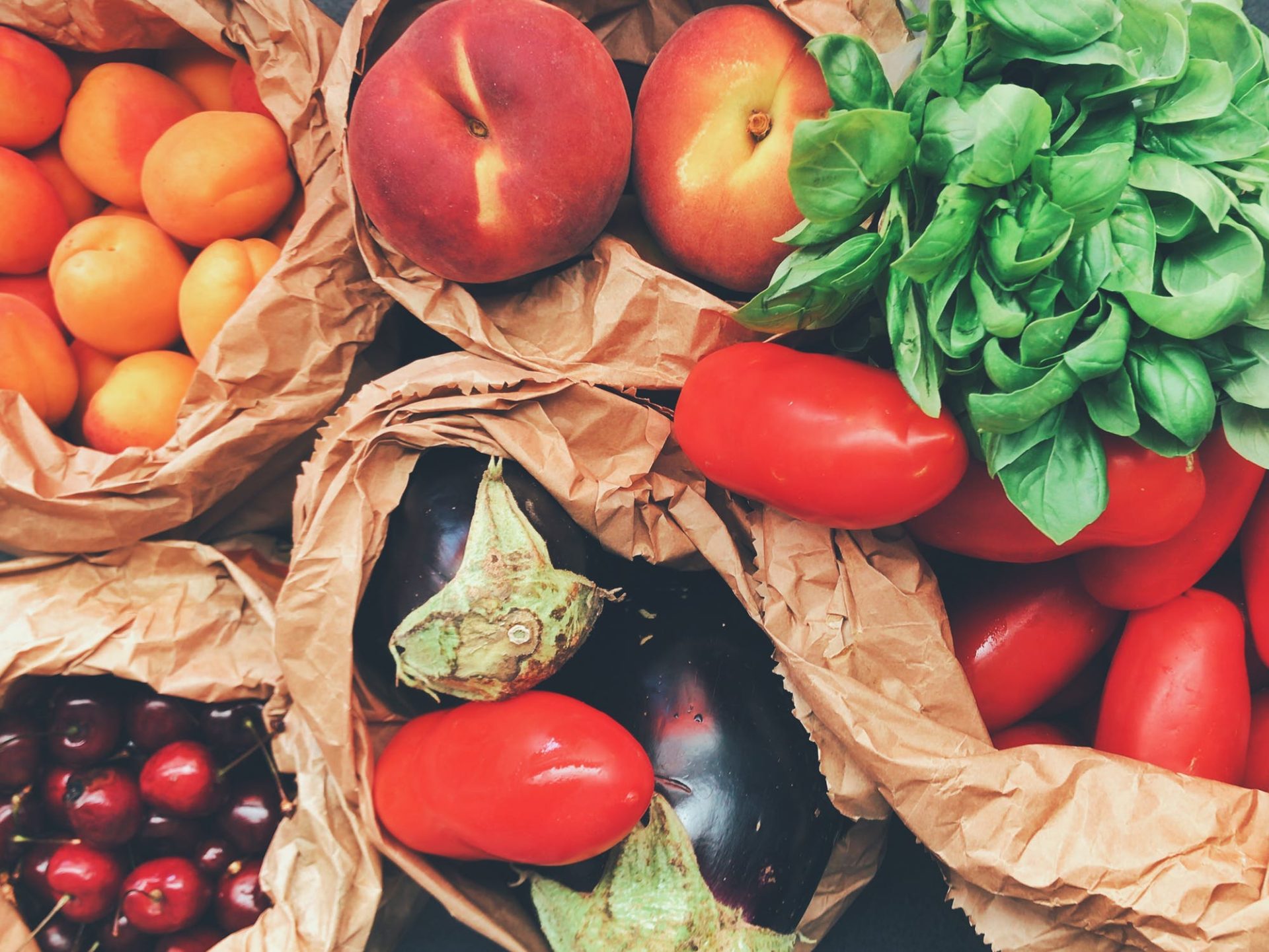 How to Trim Our Waste and Build a Circular Economy

When it comes to simple habits you can gradually adopt to reduce your carbon footprint, do you know which of the following reduces the most greenhouse gas (GHG) emissions?

a) Going beef-free one day per week.

b) Wasting no food for one week.

c) Lowering your thermostat from 22 degrees to 20 degrees during winter for one week.

d) Unplugging the microwave whenever it is not in use for one week.

The answer may surprise you: you can have the most impact – 20.1 kilograms of carbon dioxide equivalent (CO2e) emissions per week – by keeping your food out of the garbage. Every year, food waste is the source of 56.5 million metric tonnes of C02e emissions in Canada, which is equivalent to the emissions from 11 million cars. Because keeping food waste out of landfills helps reduce GHG emissions, cities such as Halifax, N.S., and Nanaimo, B.C., have organics disposal bans in place for commercial food. Metro Vancouver and Quebec are both considering a province-wide organics disposal ban by 2020.

Every year, the average Canadian household tosses out $1,766 in avoidable food waste, which adds up to a staggering $49.5 billion — enough to feed the country for nearly five months! 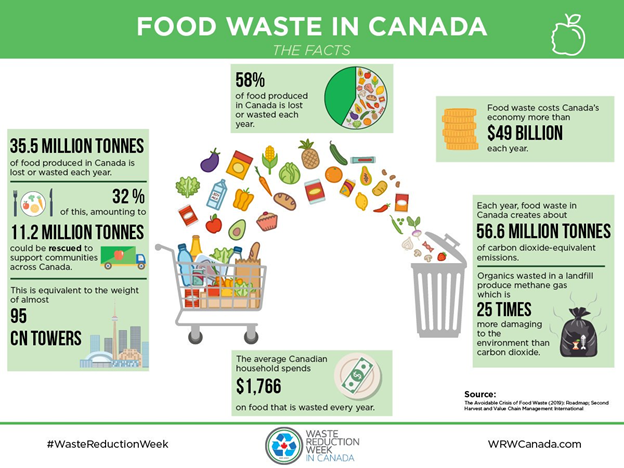 As the cost of food and the impact of food waste grow, it’s time to rethink how we consume food in order to reduce our carbon footprints while protecting our bank accounts.

Why do we waste food? A recent Canadian poll shows that the typical reasons include:

Public desire to address these habits has sparked movements such as the Love Food Hate Waste campaign, which  originated in the United Kingdom to raise awareness about the many ways people can reduce their food waste. These include learning how to keep food fresh longer, understanding expiry dates, and learning how to revive food that’s on its way out.

The regional governments of Metro Vancouver and the Capital Regional District, alongside the Province of BC, Sobey’s, Walmart, Recyc-Quebec, and the cities of Toronto, Vancouver, and Victoria are all campaign partners of Love Food Hate Waste. Together, these governments and businesses are actively engaged in developing and implementing their own strategies to reduce food waste.

The Role for Industry

Consumers are not the only source of food waste in Canada. A recent study by Second Harvest and Value Chain Management International ran the stats on food waste in Canada and found the crisis is worse than previously thought. More than half of the food produced in Canada is either lost or wasted, and the sources of all this are primarily industrial food production and the processing phases of the value chain.

Food waste occurs at the production phase due to factors such as aesthetic criteria, inaccurate demand forecasts, and changes to seasonal and temporary worker regulations that leave farms understaffed and unable to harvest full crops. At the processing phase, food waste occurs for similar reasons as well as equipment malfunctioning and inaccurate best-by labels that are primarily in place to protect brand image and consumer perception. 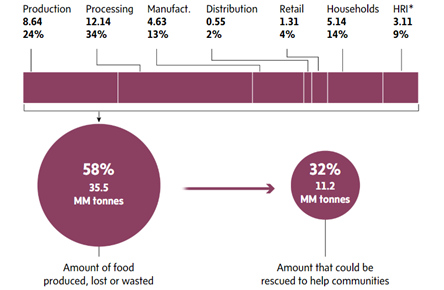 Past Canadian food waste studies put the onus on households, with data indicating that 51% of food waste comes from consumers throwing out their groceries. However, better access to data and extensive consultation with more than 700 experts is now revealing a different story that is reshaping how solution providers look at this problem.

Now We Know Better, How Do We Do Better?

Based on Second Harvest’s extensive and world-leading research, the top three drivers of the food waste status quo are: 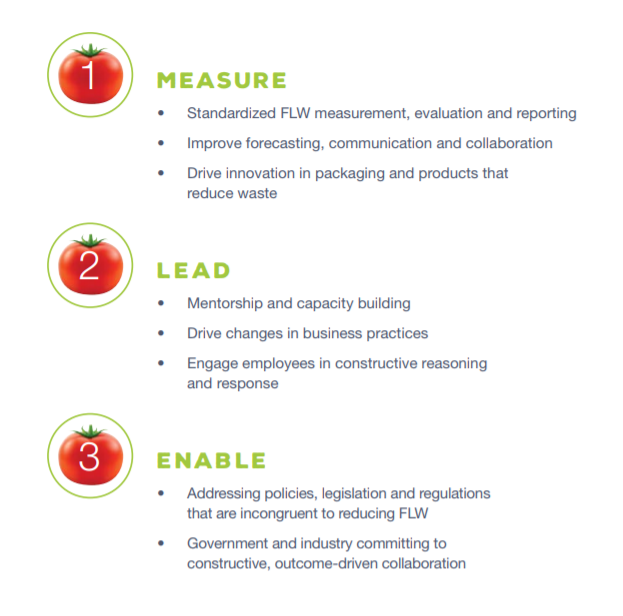 At the core of each approach is ensuring awareness among consumers, businesses, and governments. At a national level, campaigns such as Love Food Hate Waste are fundamental to discouraging habits we know cause more food waste, such as over purchasing, cooking too much food or storing food incorrectly.

However, action at the local level is equally important, and is supported by initiatives like Victoria’s Food Eco District (FED). FED is a partnership of 14 restaurants and cafés in Victoria’s downtown core who implement eco-friendly solutions, such as purchasing vegetables from edible gardens grown around the city, and holding cook-offs using local produce deemed too ugly to sell. Events like these both draw a crowd and heat up conversation around food waste in the food industry.

We Can All Get Involved

Addressing food waste is part of a larger global shift towards a model that designs out waste and pollution, keeps products and materials in use, and regenerates natural systems — aka the circular economy. This concept is pushing governments, businesses, and consumers to rethink how things are made, used, and re-used.

Want to learn more about the circular economy? Check out GLOBE Forum 2020, which takes place in Vancouver in February 2020, to hear from and connect with industry leaders who are showcasing their ideas, technologies and opportunities in the clean economy.

Whether it’s in business or at home, we can all make a difference when it comes to reducing food waste and building a healthy and sustainable circular economy. Are you taking action to reduce food waste? Tweet us all about it @Delphi_Group! The challenge is significant, but the creativity and innovation in evidence as we transition to a circular economy are worth celebrating.

Shanna Killen is a Research Analyst at The Delphi Group. For more information about food waste solutions or Delphi’s Green Economy and Corporate Sustainability service areas, feel free to reach out to Shanna directly at skillen@delphi.ca