Our Dying Oceans: Could a Circular Economy Approach Solve the Global Plastics Problem? 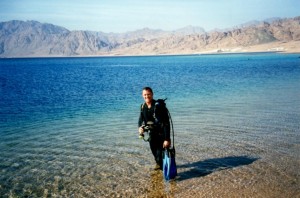 As a person with a deep connection to nature, I find myself every Earth Day (and throughout the year) reflecting on the health of our environment. In the first half of my career, I worked as a scuba dive instructor and marine biologist in some of the most pristine tropical and temperate oceans, including Hawaii, Central America, Australia, South East Asia, the Red Sea, and Northern British Columbia. Protecting our natural ecosystems is a huge priority for me, and is the primary reason I transitioned to the world of environmental consulting.

Plastics are killing our oceans

This April 22nd, my inbox was inundated with troubling headlines about the unhealthy state of our oceans, with plastics pollution being a primary cause.  The story about a sperm whale that washed ashore dead in Spain after swallowing 64 pounds of plastic debris was disturbing.  At present, there is an estimated 8 million tonnes of plastics entering the world’s oceans every year – that’s equivalent to more plastic than fish by 2050 at the current rate.

It wasn’t all bad news, though. An email highlighting key takeaways from the international GLOBE Forum 2018 in Vancouver on the actions business, government, and civil society are taking to protect our oceans was a cause for optimism. Another article suggested that scientists had “accidentally” created a super enzyme that can devour plastic pollution. However, while this is an encouraging prospect, the ability to break down plastics into their toxic chemical compounds for better recycling isn’t really a long-term panacea.

Recycling is not the answer in the end, as evidenced by the impact of China’s National Sword Policy which came into full effect in January 2018. That policy, which now bans many post-consumer plastics from entering China for recycling purposes, is sending many jurisdictions (including some in Canada) scrambling for alternatives to their recycled plastic waste streams. Some are resorting back to landfills.

A circular economy approach to solving our plastics problem

The “circular economy” model may be a solution to our global plastics problem and other waste management challenges. As described in Delphi’s 2017 report for the BC Ministry of Environment, the definition of a circular economy involves shifting the traditional take-make-waste throughput model of economic production to a take-make-reuse model. In the new model, the economic value of products, materials, and resources is retained by closing production and consumption loops, as well as by extending product lifecycles.

Re-designing products to do less harm

Approximately 80% of a product’s impact on the environment finds its origin at the design stage. In the circular economy, products are designed in such a way that harmful chemicals are eliminated from the environment and renewable resources are used, as opposed to raw, natural resources. With innovation, bioplastics derived from natural sources could eventually replace synthetically-produced plastics, with properties that allow them to break down more rapidly and with zero toxins released back into the environment.

Creating new opportunities out of resource and pollution challenges

Through the transition to a circular economy, current resource and pollution challenges become market opportunities. In fact, research by McKinsey and the Ellen MacArthur Foundation suggests that the circular economy could generate a net economic gain of 1.8 trillion Euros (CAD $2.8 trillion) per year by 2030 through the redesign of current products and supply chains.

Europe is at the forefront of the circular economy through its Circular Economy Package and related programs, with counties such as Finland, Denmark, Scotland, and the Netherlands leading the way.  The European Commission has had a Bioeconomy Strategy in place since 2012, and is investing more than 1 billion Euro into circular economy-related research from 2018-2020 through its Horizon 2020 Programme.

Where to from here?

In Canada, we have no guiding circular economy policies or bioeconomy strategy in place as of yet. However, organizations including the National Zero Waste Council, the Natural Step’s Circular Economy Lab, the Sustainable Prosperity Institute, and others have been pushing for the adoption of a circular economy approach for some time. Innovation into bioplastics is being spearheaded by the private sector, as well as groups such as Bioindustrial Innovation Canada. 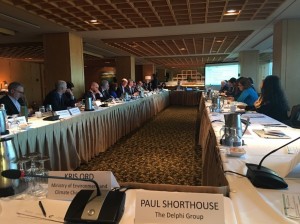 In March 2018, The Delphi Group co-convened a roundtable event at GLOBE Forum 2018, which brought together key stakeholders from across the country to discuss the concept of a “Circular Economy Roadmap” for Canada alongside a number of international leaders, with the plastics challenge a key issue on the agenda.  Some Canadian organizations, including the International Institute for Sustainable Development are, in fact, proposing that Canada could replicate Finland’s Circular Economy Roadmap as a global best practice (see article here).

Embracing circular economy solutions can address the plastic issue while simultaneously providing economic development opportunities. In Canada, the wheels are beginning to turn. Canada is hosting the G7 Summit in June 2018 and is pushing fellow nations to sign a “no plastics” pledge to save the world’s oceans and has committed up to $2 billion to ocean protection. But to get there, we’re going to need a game plan – viable alternatives to plastic that engage the business and investment community as well as consumers and civil society.

We can accelerate action with respect to the global plastics problem in a number of ways, including:

Paul Shorthouse is a Regional Director with The Delphi Group. Recognized as an economic development expert, Paul has been at the forefront of defining and measuring key sectors of the green economy since 2009. For more information about Paul’s work on economic development and the circular economy, please contact him directly at pshorthouse@delphi.ca.